Jericho was and still is an unusual place. The first time I went to Jericho it was to hold a public outreach. Terry McIntosh had established the Jesus House of Prayer and had permission to have a parade and to have worship in the city square. This is a Muslim city but the officials gave us permission to do this.

Musicians came from different parts of the country and began practicing together. Another group came that did short skits telling about Jesus and how He is the Savior. We were a diverse group but we were excited. 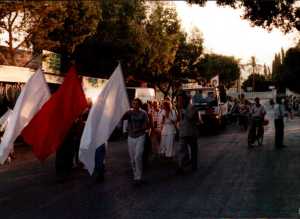 The evening came for the parade. Terry had gotten a truck with a microphone and as we paraded down the street, the musicians played and we sang worship songs. We greeted the people in the streets who came to see us. We had drawn quite a big crowd.

When we got to the public square there were more people waiting for us. Young people did skits and this drew more young people from Jericho. When the skits were finished the worship team played a couple of songs and then Terry was introduced. He preached a message about Jesus and how salvation was only through Him. When he finished he invited people to the Jesus House of Prayer for more information.

A group of us stayed around the public square to talk to people and find out if they had any questions. When the square cleared out we went to the Jesus House. We were amazed at how many people were there to find out more information. Of course we were up most of the night talking to the people. They were very interested.

So what makes this public outreach so different than other outreaches you have seen? This is a Muslim city and all but about four hundred people are Muslims. This was the first public outreach for Jesus in the history of the city. Through the weeks many came to know Jesus as their personal savior.

God softened hearts to open the city to this ministry. We never had any problems with the government officials. This was a move of God and I am so blessed to have been a part of it.

Living in the blessing,
Jan