I love weddings. I bet you also love weddings. The joy on the bride’s face and the anticipation in the groom’s face are priceless. Of course the brides parents are radiant. It is an exciting beautiful time. However, each culture is a little different in the way weddings happen. I was fortunate to be invited to a wedding in Jericho.

Ahmed is with the tourist police. He and Bob, my husband, seemed to become fast friends. When he got married we were invited. Boy was it different. The event was held in a large restaurant with indoor and outdoor seating. Ahmed and his bride-to-be are Muslim and in that culture, women and men do not sit inside a building at the same time. So the men sat outside during the ceremony and could drink either coffee or tea. Muslims don’t drink alcohol.

I went inside with the women. I sat next to a woman who spoke English so I could order a soda, coffee or tea. I knew no one, and felt a little odd. Bob, on the other hand, knew several men there.

The music started again and the bride was in the back. She had a lovely white dress. On each of her fingers were taped candles and each of the candles were lit. She started down the aisle doing a very sensual dance and moving her hands slowly so the candles didn’t come off or blow out. It was kind of similar to the way a belly dancer moves her hands. I had never seen anything like it.

When she got to the stage, her mother came and blew out the candles then took them off her fingers.

The Imam, like a Muslim priest, was there and he spoke over them. I don’t’ know what was said. Soon all the women were standing and clapping. I assumed it was over. People were going forward and shaking hands with both the bride and groom. But it was women only. 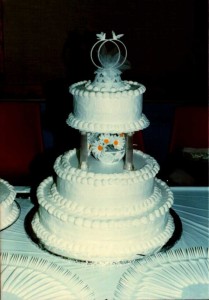 Finally, a photographer came in and started taking pictures. I was ready to leave when someone came and took me by the arm. I was ushered onto the stage. When they took a picture of the women in the wedding party, Ahmed told me I was to get my picture taken with them.

Someone was sent out to get Bob. He was the only other man allowed inside besides the photographer and the bridal party. We were included in all the other wedding photos. To this day we don‘t know why.

People started leaving. Bob and I said our good byes and headed back to the Jesus House. Last we heard Ahmed and his wife were expecting baby number three.

One thought on “A Wedding In Jericho”