In 2000 the Israelis and the Palestinians went to war. It was called the Second Intifada. Intifada means throwing off. I won’t bore you with how it started, but I was there living in Jericho.

One morning we woke up and found we could not leave Jericho. If we did we would not be allowed back to the city. The stores were closed and we were told it was war.

We lived about a block from a Palestinian Army Base. Every night we would go up on the roof and watch the Israelis and the Palestinians shoot at each other about a mile from our house. The next day we would go with friends and see the damage and find out if there was anything we could do to help. 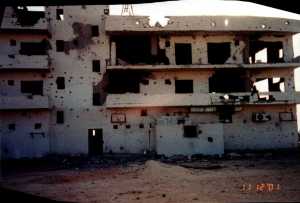 One night we went up on the roof and I noticed something different. The soldiers from a block away were all over the street. They were running and hiding. That didn’t look good. We were getting off the roof when we heard a loud boom and then another. At that point all the lights went out. No one needed to tell us we had been bombed.

We went into the house and lit a kerosene lamp and called Terry McIntosh who actually rented the Jesus House. He was in the States. We told him what happened and that we were okay. We said it didn’t appear to be very close to us. After we assured Terry that all was okay with us and the house, we decided to go sit outside where it was cooler. We had AC, but no electricity it was hot.

As we were taking the chairs out to the back yard, we heard someone at the gate quietly calling our names. We walked to the gate to see a friend who had come to see if we were okay. We let him in and he stayed in the yard with us most of the night.

I can honestly tell you we were not scared. I know that sounds crazy, but the peace of the Lord was so strong on us. 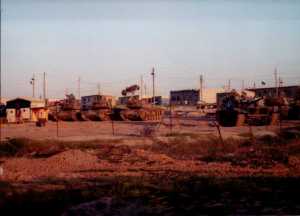 God gives us what we need when we need it. And until that time I didn’t need peace while living with a war zone.

About 3 in the morning the guns silenced and we could no longer see flashes of light. Our friend left so we decided to go to bed. When we got up the next morning, things were quiet and it looked like all was back to normal. That, of course, was deceiving, but I will write more on that later.