When we first went to Russia, we had a lot of different reactions but no one ever rejected a copy of the New Testament. We handed them out in market places. Nothing is more humbling than having people kiss your hands as you handed them the Book. Many people looked at us with tears in their eyes and thanked us over and over. We enjoyed every thing we did, but the thing we enjoyed most was handing New Testaments to the people. 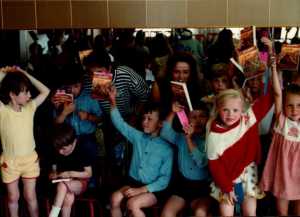 We were also invited to the public schools. They would have rallies in the school gymnasium and we would talk to the young people about Jesus and then give them a New Testament. If they didn’t have a rally, we would go to each classroom and talk to the children and hand out the books.

One of the greatest treasures I have is a broken key chain that a young boy pulled out of his pocket. He handed it to me with a huge smile on his face and said it was mine. That was all he had and he gave that because we had given him a New Testament.

We went to hospitals and old folks homes and the reaction was always the same. We went to military bases and distributed New Testaments to the soldiers. Their military isn’t like ours. They have to buy their own clothes and food. Only the gun is given to them while in the service.

We went to one old folks home where the people asked why they should trust us and our message about Jesus. They said their government had failed and they had been told to trust the government. I just told them I could not convince them to trust me or any of the other speakers. Then I told them we would give them a book. They should read that book and figure it out for themselves, because I believe God speaks through his Word.

We gave out hundreds of New Testaments. How do we know they read them? Everywhere we went as soon as they got a book in their hand they would open it and begin reading.

Many of the school children went directly to their seats and began reading the word of God.

At the army bases the soldiers filed by to get a New Testament and when we walked out side we saw them sitting down reading it. It was rewarding and I know many lives were touched because the Bible tells me His Word does not return void. (Isaiah 55:11) God speaks through his Word.

Another tale from the mission field next week,

5 thoughts on “Bibles for Russia”